The name of this German-language software pretty much explains its purpose: in German, Sparbuch means a 'savings book.' And when it comes to saving on taxes (Steuer in German), WISO Steuer:Sparbuch really stands out as a robust solution that helps you save on taxes. Developed by BUHL Data Service GmbH in Germany and intended for taxpayers of different categories who file their tax returns in Germany, WISO Steuer:Sparbuch is a paid Microsoft Windows application that provides detailed financial advice concerning payment of taxes, automates tax return preparation and submission, and also offers advanced tax optimization algorithms to minimize the amount of taxes paid.

Using WISO Steuer:Sparbuch, one can bring his or her tax return process to a new level of systematization and, quite possibly, end up paying less this year than the year before. The software guides its user through several interrelated steps that also depend on each other: first, one has to enter the initial personal and financial data, then, after a tax return is prepared, different optimization options are calculated and presented. Last, one can submit the finalized tax return form electronically to the German Finanzamt (Tax Administration).

WISO Steuer: Sparbuch is released on an annual basis to match the financial year cadence. Demo versions of WISO Steuer:Sparbuch and other BUHL's financial or tax-related software are available for downloading from the developer's official website. 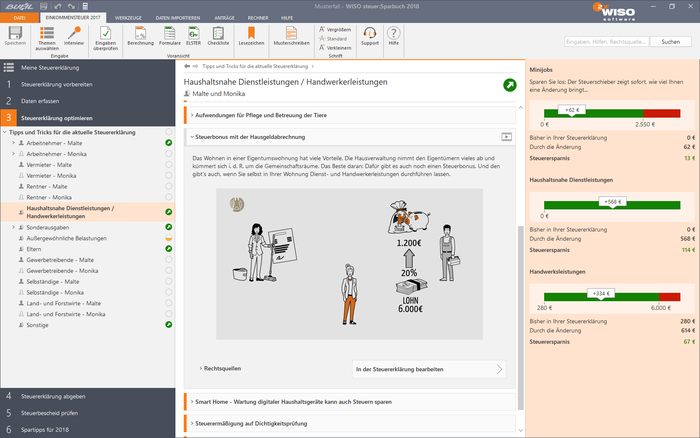