What is Winamp? How popular is the Winamp software and how to download it? We have collected thousands of software titles and know the answer!

One of the earliest multimedia players on the PC platform, Nullsoft's Winamp was once hugely popular and a de facto the player of choice when it came to listening to music on a PC. Winamp is an all-purpose multi-format multimedia player developed by Nullsoft, Inc. and distributed as a freeware Microsoft Windows or Apple MacOS application (and an Android app, too).

First an audio player only, Winamp now additionally supports a dozen of video containers and codecs, requiring no external libraries or so-called codec packs. The key feature of Winamp is its plug-in system. In fact, the larger part of Winamp's out-of-box functionality is implemented as plug-ins (e.g., encoder format support, visualizations, etc.), and support of additional or rare or exotic formats can be added by installing appropriate plug-ins, too.

Features provided by Winamp include eye-candy visualization plug-ins, fully skinnable interface with color themes and several preinstalled skins like Bento or Winamp Modern, a configurable equalizer with sound effects, and even a simplified web browser and access to Nullsoft's SHOUTCAST service, all of which can be integrated in a Multi Content View. For fine-tuning the application's behavior, Winamp offers rich configuration options, accessible via Preferences.

Though Winamp has been sloping down in its popularity since 2014 when its latest official version had been released, it nevertheless has its steady following even despite some strong competition. Winamp binary installers are available for downloading from the software's official website. 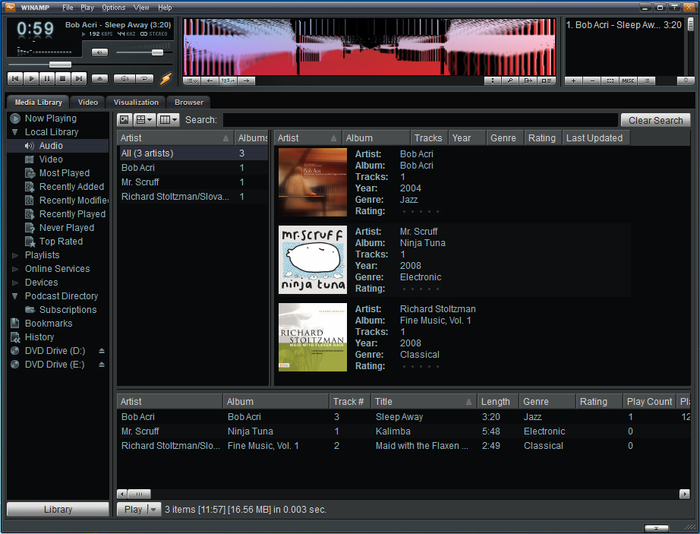